Roman kilns next to the A14

Last year I was fortunate to be able to go out a few times with the archaeology teams that were running a series of digs as part of the A14 redevelopment. As land was cleared and topsoil removed for construction works the history of this small area of East Anglia, just north of Cambridge, was revealed. 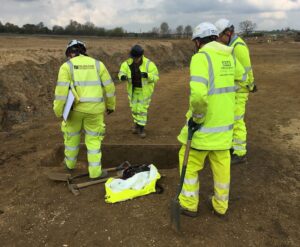 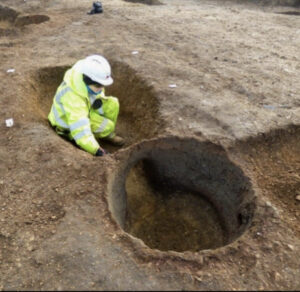 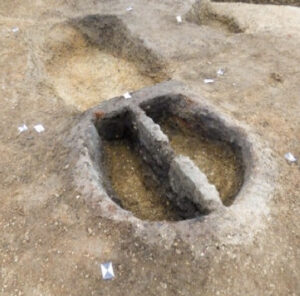 Settlements from the Bronze Age and Iron Age were discovered, right through to Roman, and beyond. A medieval village was uncovered that had been abandoned during the time of the Black Death, which is apparently not uncommon. The Roman remains were the most interesting for me with over 30 kilns discovered showing that the area had been an important site of pottery manufacture. The central and right hand image show two of the kilns, one with a single tunnel connecting the fire pit with the chamber, where the pots were packed, and the other with two. The kilns were of a simple ‘figure of eight’ or ‘dumb bell’ construction, with a small circular clay-lined firing chamber or oven and an associated stokehole. Generally, the kilns were aligned east to west or south-east to north-west with the firing chamber to the west and flue leading to the stokehole to the east. Remains of pottery found within the kilns, which include wasters, suggest the kilns were primarily used to produce a limited range of utilitarian lid-seated jar forms, with associated lids.

The Roman kilns were a vast technological improvement on the Bronze Age and Iron Age kilns, which were little more than enclosed bonfires in a shallow pit. These new kilns separated the pots from the firewood by using a firebox. This not only protected the pots from sudden temperature rises as the wood caught fire, but enabled the Roman potters to continually add more wood and control the air flow through the kiln. The result was that higher temperatures could be achieved, making stronger ware, and a higher success rate. The pots were packed on a suspended perforated floor inside the chamber of the kiln, the supports of which can be seen in the right hand image.

The question is, what clays did these potters use? The bedrock here changes from Oxford clay to Kimmeridge clay but there are layers of alluvial and boulder clays on top. 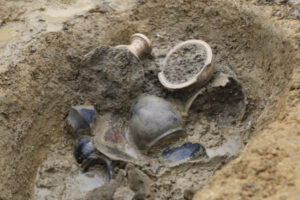 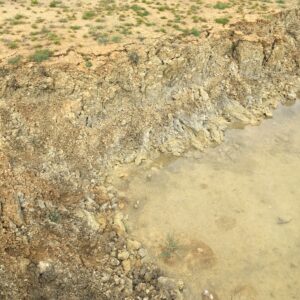 Piles of pots were found along with over 3 tons of shards, that all have to be cleaned and studied. The image on the right shows one of the alluvial clays close to some of the kilns. Of all the pottery shards collected by the Archaeologists the most common clay body found is a sandy grey or oxidised ware with varying amounts of additional sand and fine flint fragments added as additional mixing agents or temper. In addition the shards contain the remains of the fired clay kiln superstructure and its kiln furniture. This material was found to have been made using three different clay bodies. I have been testing the various clays that I collected from the sites and this mug is covered with a glaze developed from the Oxford clay.