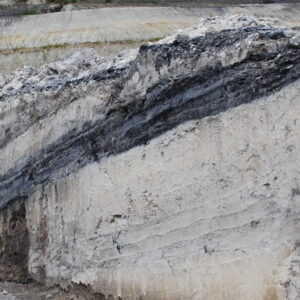 Clays, though ubiquitous, are incredibly variable in their mineral type, content and character. Each will have its own potential use, though most of the surface clays found in the UK are only usable by potters as earthenware clays, as they melt at the higher temperatures of stoneware. Making glazes from most available found rocks generally requires firing them to a temperature of over 1200C and the number of clays occurring the in UK that it's possible to make pots from, without them collapsing and melting, are limited. Finding an unknown clay that is refractory enough to use to make pots for a woodfiring is a rare treat for me. Other clays, that I collect, I use to make slips and glazes.

The image above shows some of the younger clays in the UK (Fen clays) overlaying the grey Oxford clay , near my home in Cambridgeshire. The Oxford clay was deposited  in the Jurassic, and was quite literally, the stomping ground of dinosaurs. All of these clays melt at stoneware temperatures, so are only useful as earthenware clays or in glazes. One of them is the foraging potter's holy grail, forming a beautiful glaze by itself, with no additions required. 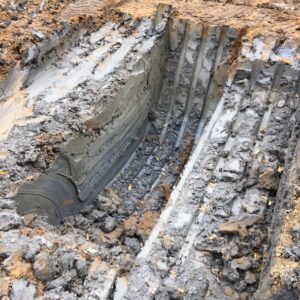 Every new clay that I find requires a sequence of testing to find out if I can use it and , if so, what for. Unfortunately colour gives no indication of how it will behave in the kiln.

Firstly I need to know what else is in it. Most clays were deposited along with grit and sand, and sometimes larger rocks. So I add water, making it into a slip, and then pass it through a series of progressively finer sieves, collecting what it left on the screens. Most sands are good to have in clay bodies, but limestone is a problem.

Next I need to fire it to different temperatures to see if and when it starts to melt. It's here that the testing process diverges. If the clay turns out to be suitable for clay making, I make shrinkage bars so I can assess shrinkage and porosity at various stages and trial it for use in clay bodies. If, however, it has melted or started to melt, I will try it as a slip component and use it as an ingredient in my glaze testing.